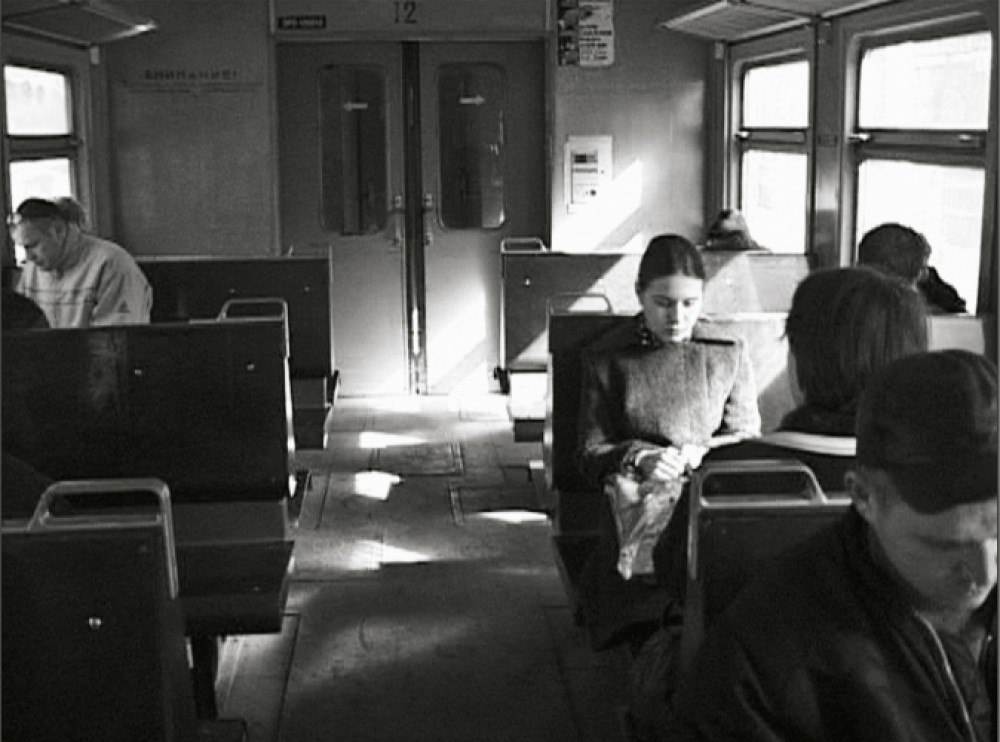 The vast expanses of Russia make trains into more than means of transportation: instead, they become places of residence where singular forms of life unfold.

In Olga Chernysheva’s work, the inhabitation of trains gains its inner form from the economics of beggary and traveling trade with cheap goods and from the aesthetics of wandering musicians and rhapsodic poets.

The film’s ethical mood is underlined by the “timeless” music of Mozart, which supplies the recognizable social texture of the image with an exalted well-temperedness, as if to tell the spectator: you don’t have to hurry, you have already reached where you wanted to go to. For the duration of the journey, it is you who belong to this space and not it to you.

Chernysheva’s train can be likened to a monad, whose movement through physical space (movement to…) runs opposite to the forces that supply it with its form. The camera moves from the tail of the train to its head wagon, while the train’s inner forces (traders, beggars, rhapsodic poets) move in our direction. These forces are obviously recognizable as images of the past, coming toward us from the future. It is this sequence of image-memories from the future moving toward the spectator that construct what could be called the film’s ethos, its ethical frame.

Another aspect that reveals the ethos of Chernysheva’s film can be characterized as the immobility of movement. The illusion of perspectivism, which the camera’s movement toward a vanishing point of covergance would seem to entail, is destroyed by the repetition of one and the same musical phrase and the reversed (anti-perspectivistic) movement of figures, but it culminates in what is probably one of the film’s most important episodes, its “punctum”, the appearance of a woman between the cars who gazes into the camera for a long time. It is in this episode that the camera first reveals its own physical presence. All movement comes to a halt.  In the mutual reflection of the figure and the camera, the reversibility of what is taking place emerges.

The consecutive “movement to…” has ultimately been interrupted.

In this sense, Olga Chernysheva is effectively speaking of the fictionality of any purposeful movement. Not to move toward something, but to learn to the art of living within something always already available, something always nearby. It is precisely by existing within this “nearby” that we can gain what one could name with the grandiloquent word of “freedom”.